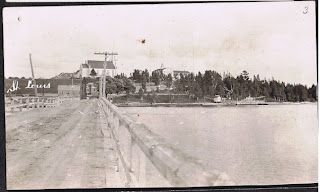 Saint Louis de Kent is an acadian village in Kent County New Brunswick in Canada. I had the good fortune of spending quite a few summers there.
The people are so very friendly. They have a wharf or marina. My brother in law had a sport boat and we used to go out into the ocean to the Dune to dig Bar Clams, we also went to an island that is a bird santuary and went and did some jigging for Cod out in the Ocean. This village has been there for a long long time. Many of the villagers live to a ripe old age. In 1786 Jean Babineau and his son Joseph left Memramcook in search of a new homestead. Jean had some daughters married in Bouctouche,in Richiboucto and at Aldouane. But he continued further north. Arriving at the northern part of the Kouchibougouac River he found three english families living there. They decided to settle in the area attracted mostly by the meadows. But in the month of December Jean Babineau drowned while trying to cross the Petitcodiac River. The following month of May Joseph and his family came at settled at Kouchibougouac what it was known as at the time.And he was the first Acadian Family to settle in Saint Louis. Later other families arrived, the Barriaults, Henri,Poirier,Maillets,Richard,Thebeau,LeClerc,Vautour etc.
Now Lorraine Coulombe my friend has a site on Facebook on Saint Louis and she has posted all these photos of people of Saint Louis and she has given me permission to add some on my photo gallery at http://www.acadian-roots.com/ I would really suggest you look at them, notice their clothing, their age,their large families, I will be adding a few more soon. And if you are on facebook, check out her Saint Louis Group and my Old Photos of New Brunswick group. I am sure you will be impressed. I want to thank Lorraine for sharing her photos with me and with all of you. Some of the photos in my gallery include Auguste dit Audjuste Richard and his wife Pelagie Maillet, their children, Louis Maillet and his second wife Lucille Doucette and the children of Louis.
Thanks for the visit and do stop by again and if you happen to go to the CMA2009 stop in at Saint Louis de Kent for a brief visit.
Have a great day
Aline
Posted by alineskee at 10:24 AM