Why am I going to talk about graves with no stones? Well because I am feeling pretty good about a good deed done by myself and my family.
Three weeks ago I went to the Mall and on my way out there was this office set up to sell monuments. So I went inside and inquired on prices .Well to my surprise they had a sale on a flat Placque, the size was 20 by something. So I hurried home and told Mom and my brother about the sale. And we decided then and there to have one done for my Dad who died five years ago. His not having a marker really bothered me. And the best of it, is that he is buried with his grandparents who also had no Marker on the gravesite. One of them died in 1941 and the other in 1951. All these years I am sure there must have been someone searching for their grave. So we have ordered the stone with both their names and we added Grandson and my Dad's name and dates of birth and deaths. What a nice feeling to be able to do this.
I am sure many years ago , folks were poor and could not afford tombstones, it is a shame because sometimes records get lost , records burn and so does the location of their burial. So now is the time to put stones or even a small plaque on some graves of our ancestors so that others will not have a problem finding their ancestors. I have a grandfather and a baby sister that are buried in a cemetery and we do not know where. Blueprints have burned so all we know is that they are somewhere in that cemetery. If you cannot afford a stone, ask the cousins and aunts and uncles to help out. Make it a family project. Have some kind of fundraiser to buy a stone. Where there is a Will there is a Way as the saying goes.
That''sssssss allll ffffolks. grin.
Thanks for the visit, do stop by again
Have a great day
Aline
Posted by alineskee at 12:04 PM 3 comments: 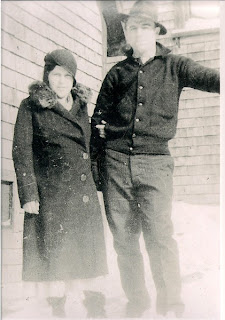 IF you have Arsenaults in your family line who were on Prince Edward Island at one time or another, Jean Bernard has published the first Arsenault's of Prince Edward Island. The book has 750 pages and is well researched and documented. So if you want to follow your grandfather or greatgrandfather to Pierre Arsenault the first one to arrive then I would suggest you buy the book. It sells for $47.50 each. Mr Bernard is also preparing four more volumes of the Acadians on PEI, Volume two will be Albert to Francis,Volume three will be Gallant, Volume four will be Gaudet to Overback and Volume five will be Paquet to Witzell.
Contact Mister Bernard at jeanbernard61@hotmail.com .
On another note, I am always working on my website at www.acadian-roots.com , and I was wondering if there is anything that you my readers would like to see added on my website? I am working on a project now to be added early in the fall. I am open to suggestions, I want to add something that will benefit all you genealogy researchers.
You can answer by leaving a comment or contacting me through my acadian-roots.com website.
Well last week my brother went to see a cousin of ours and while he was there he came across a photo of my parents taken when they were newly married. What a treasure to find such a photo, my brother had one made for me. I am sharing the photo with you. A treasure to behold and another photo to share with my son and his family.
Thanks for the visit do stop by again, you never know what I will be blogging about.
Have a great day.
Aline
Posted by alineskee at 6:08 PM 2 comments: 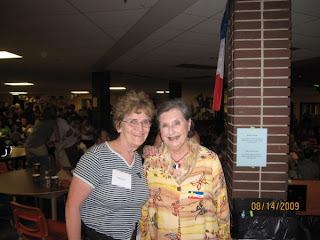 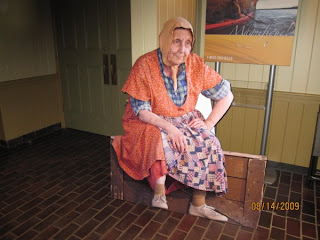 Have you ever wondered about La Sagouine? What is she all about? Well La Sagouine is a novel written by Antonine Maillet a great writer. The novel was inspired by a real person named Sarah Cormier. In the book, La Sagouine was born in Kent County New Brunswick and a daughter of Pit who was a son of Boy who was a son of Thomas Picote. She was a poor uneducated woman struggling to raise a large family during the Depression.She was a beautiful woman in her younger days and times were hard she became a prostitute. Later she married her cousin Gapi. She married him twice, once protestant and then again Catholic (hey Mom and Dad did that too grin). La Sagouine and Gapi had twelve children and nine of them died during the Depression. For the rest of her life La Sagouine became a scrubwoman. The book itself is a collection of monologues. Here are a few of them.
"Us,we aint educated, "n we don't talk fancy... The priest him, when he preaches, he talks like the doctor's missus throwing out sum big words dat he can turn into a mean sentence. They call that Litterature? Us we aint never seen a speech of litterature in all our lives. We talk with the words we have in our mouths enn we don't go too far to find them. We got em from our fathers that got em from der forefathers. From mouth to ear you could say.(by Hans Runte).
Next about the Depression; " Why yes during the depression times had gotten so bad dat a person could not sink no lower. But when time gets dat low they decide to do something not to let us die. During the Depression for example they invented Soup. From dat time on,things started to get better for us. Every month we had our sack of flour,jug of molasses n sometimes even buckwheat to make pancakes. The Depression saved us from downright poverty.
Who is the actress who plays La Sagouine? Well her name is Viola Leger.She was born in Fitchburg in 1929.She was teacher and later she met Antonine Maillet and became friends. Viola Leger went to Boston to learn to teach theater, then a year later she moved to Paris to study to become an actress at the Jacques LeCoq school. While she was in Paris she received a call from her friend Antonine the author of La Sagouine asking her if she would consider playing the leading role in the play, so Viola returned home. She played La Sagouine over and over again all over the country, by the year 2003 she had played over 2000 times in French and in English. Viola Leger also acted in other plays such as The Smugglers,The Bourgeois Gentleman,Evangeline Deusee, The Racket,Harold and Maude and many more. In 1978 she was given the honor of Chevalier de L'Ordre de la Pleiade, in 1989 she was awarded the Officer of the Order of Canada for her servide to Canadian French Drama and in 2001 she was appointed Canadian Senate by Jean Chretien and she served until 2005. She is a great lady of the performing arts in Canada. And when we attened the Leger/Trahan reunion at the CMA2009, she was there and I had the honor of having my photo taken with her.
I hope you have enjoyed today's blog and if you are ever in Bouctouche New Brunswick be sure to check out Le Pays de La Sagouine and maybe, just maybe you will see a great lady on stage. Thanks for the visit ,do stop by again.
Aline
Posted by alineskee at 6:18 PM 2 comments:

Come to the Acadian CMA2009

And why should you come to the CMA2009? Well first of all, you will meet old friends and make new friends along the way. You will be able to chat about genealogy, and family, and different cultures. You will meet Cajuns and if you are Cajun you will meet Acadians . There will be people from all over the world. All gathering in Northern New Brunswick for weeks of fun and laughter.
You will be able to listen to talented singers and muscians, you will hear cajun music, acadian music. Singers like Zacharie Richard and Edith Butler and others will perform on stage.
There will be tours, there will be booths with people selling souvenirs and different foods.
And on August 15th is going to be a great day, first of all around 11 am, if you are in the area come meet us near the Carrefour de Mer in Caraquet. We will be wearing yellow, get a yellow hat and come meet us. And also on Acadian Day Aug.15 there will be a tintamarre (parade) in Caraquet and I can imagine the people who will be marching in it with all their Acadian and Cajun colors, a sight to behold. Then a big stage show in Caraquet where I am hoping to be sitting close by to see Zacharie Richard and Edith Butler perform. The excitement is mounting, and the day will soon be here for us to leave to go.
I have already met a couple from Louisiana who are on their way to the CMA today , what a lovely couple and we are meeting them again in Pokemouche. They are coming to meet us at the Carrefour if possible. So I really hope to meet a lot of online friends. See you there.
On another note and still talking about reunions, our Bergeron-Damboise Reunion in Fredericton was a success. On our last day, we had a tree planting ceremony on the grounds of the home of the Lieutenant_Governor of New Brunswick who also had a reception at his house for us. What an honor for all who participated. So is that all there is for the Bergeron-Damboise reunion? I doubt it because some are already asking when is the next Bergeron-Damboise reunion? And some think that Louisiana would be a great place to have it. I would also like to see it being held in Quebec, if not for the next reunion ,then the next one after that should be in Quebec. And wouldn't it be fitting to have it in Montreal where Barthelemy had his bakery? Hmmm. Something to think about.
We have had a few days of nice weather, sure hope it stays that way for the CMA.
Thanks for stopping by and for listening.
Have a great day
Aline
Posted by alineskee at 6:56 AM 4 comments: