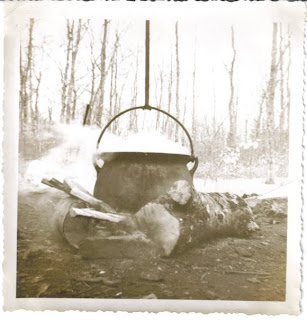 If you think this pot is something used by cannibals you are not correct , grin. This pot was used to make maple syrup. It was bought by Jean a Nicolas Babineau in 1770 in Turtle Creek New Brunswick. I want to thank Omer Babineau for allowing me to use his photo.
Acadians began tapping trees very early in history.According to Diereville he says that as early as 1708 Acadians were making maple syrup using similar methods as those today. For many years maple syrup was used instead of sugar.
Sugar back then had to be imported along with molasses from the West Indies.
Now throughout Acadie berries were plentiful, there were wild strawberries, blackberries, blueberries,gooseberries,and cranberries, and berries are full of vitamins which was good for our ancestors. They gathered wild herbs such as Dandelion blossoms used to make wines. Summer savory was a herb that was used a lot as well as wild caraway,hops were picked to make yeast. They ate wild game such as porcupine,beaver, rabbits,even squirrels and all kinds of wild birds, blackbirds, pidgeons,meadowlarks, wild ducks, partridges and so on. They had chickens and pigs,and they would only kill the cows when they had no more use for them. Today many of us would not eat some of the things that our ancestors did, but they had to survive the best way they could. And who knows ? Maybe it was delicious, for instance we love lobster but in countries where there are no lobsters, people would shun at the thought of eating them. Now our Poutine Rappees, they look gooey but they are scrumptious and many folks would not want to even try them. I dread at the thought of being in the woods and having to survive and having to eat whatever I could find.
Now I will share a recipe with you. If you ever come to New Brunswick, Nova Scotia, PEI and someone says do you want a Pet de Soeur? Say yes!
Pet de Soeur
Dough
2 cups flour
3 1/2 tsp baking powder
1/2 tsp salt
1/2 cup shortening
1 cup milk
Mix all together. Until a soft dough is former, if it is too wet add flour on the board. Roll the dough until it is fairly thin maybe a little thicker than a pie crust.
Grease with butter, add brown sugar and sprinkle cinnamon on the top. Roll the dough like a jelly roll and slice into circles around one half thick.
Pour water in a casserole dish. Put the sliced dough in the casserole dish and bake 375 F for about 25 minutes or until the pet de soeurs are golden brown. I sometimes do not even put them in casserole dish with water. I just cook them in muffin tins. mmmmm very tasty.
Thank you for stopping by, do come again.
Have a great day
Aline
Posted by alineskee at 3:16 PM