HURRY LET'S RUN IN THE FOREST

Who was running in the forest? Why? Well if you studied or read about the Dispersion of the Acadians in 1755 you would know that our ancestors had to run away or be made prisoners of war . Some Acadians escaped from the prisons even to also run and hide in the forest to avoid ca 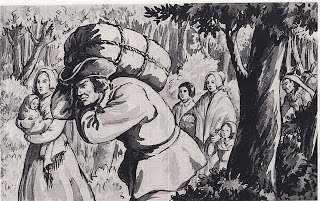 pture by the English.
What hardships they must have endured. Men,women and children,young and old all running through thick woods, depending what time it was, they had to endure insect bites, falls and scrapes, hunger, hot and cold weather.
Some became ill, was it from maybe eating wrong plants? Or wrong berries? Can you imagine them at night time, probably with a fire burning, no lights, pitch black. Hearing the unfamiliar sounds of the night. Coyotes, wolves, owls, bear, moose, wondering what the sounds were and if they were safe. Children crying because they were afraid or they were hungry. The men had to hunt for food and catch whatever they could such as rabbits, raccoons, beavers, deer, small birds. They did not have good tools to work with either, an ax or hatchet, a knife maybe. The brush would be thick at times. They had to go on. Some Acadians walked through the forest for days and days some died along the way.
One group of Acadians led by Michel Bergeron son of Michel Bergeron dit Nantes made their way up to St Gregoire Quebec first stopping in Cacauna with the native americans, and during the winter making their canoes to continue on their way.
What hardships these ancestors must have gone through. When you go for a walk in the woods, think about them, look around now the woods are cleared and you can walk through them but imagine the trees not being cleared, no paths to walk on. Imagine how your feet would hurt, our ancestors must have felt a lot of pain. And winter time,oh my I cannot imagine what they went through on their journeys. Food would be scarce because the snow would be deep, and it would be awful hard to walk . No berries, just a few wild animals if they could catch them. What about water? What did they do? Probably they found some streams or springs, but during the winter, possibly they would maybe melt the snow? But how did they survive the cold nights? How awful it had to have been for them. All because they were fleeing for their lives, to get away and wanting to live.
Well I went to the genealogy center yesterday and I was looking for something and came across the photo above, and said to myself, now that would be nice to put in my blog with a story to go with it. It sort of makes us think about our ancestors and what some of them went through.
I do hope you enjoyed my blog and will stop by again. Thank you for the visit.
Have a great day
Aline
Posted by alineskee at 1:24 PM

Gordon give me more information I will see what I can find. was he born in St Louis?