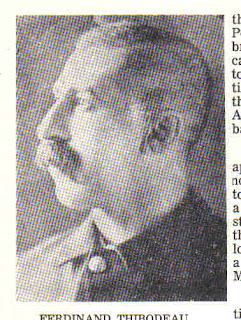 Who was Ferdinand Thibodeau? Well first of all he was said to have been born in Memramcook, I have not found him there as yet.I found him in the 1911 census as being born March 1850, his wife was named Adelaide,they had three children.But why am I talking about him here? I was looking through a book that I have and there he was. In 1885 he became the Town Marshall in Moncton,he held the position until 1890. He was also considered to be quite a Champ boxer under the bare fist rules. During the 1890s he ran a hotel or tavern and his name appeared in the paper quite often on Scott Act violation charges.He usually got an adjournment or acquittal.In the 1911 census he was listed as a hotel keeper.
Well today I awoke bright an early and decided to bake some bread, so I gathered my ingredients as I went along, first the water, then milk,sugar,shortening,flour,finally the yeast. Now where is my yeast? Oh I don't have any yeast, my water was lukewarm in my pan,so off to the store I hurried, got there ,their yeast was outdated, back in my car up to the grocery store called Needs, nope no yeast.My bread, My bread ,what's gonna happen? Off to the Coop I go, finally yes they had yeast, I asked the lady in the line up,can I go ahead of you, my bread is all ready but the yeast.Sure ,she replied, so off I go home to finish my bread, oh it is going to fail, it won't raise, my water is probably too cold now. Anyway to make a long story short, it raised and it cooked and it is great. Whew!.
Now I would like to finish by telling you I have something new on my site again. If you are familiar with Moncton New Brunswick, please check out my website at http://www.acadian-roots.com/ I really hope you will enjoy my new page.
Thanks for stopping by, do come again.
Have a great day.
Aline
Posted by alineskee at 5:02 PM