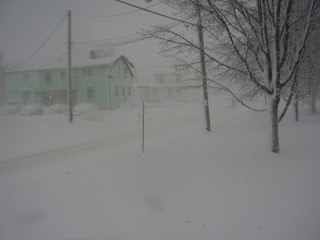 Well so much for clam digging, now it is snow digging.I took this photo along with others this morning. The snow is wet and heavy and it is still coming down and very windy.It is a good think I cancelled my hair appointment, the car is buried and the driveway full. I cleared the back door and took Thunder out, well he did not mind the snow, he rolled and he ran and he rolled again, he was having a great time,while I was waiting and freezing. haha.
Last night I was watching television and I turned the station to the documentary one, and I was surprised at what was being shown, it was the expulsion of the Acadians, of course I was glued to the television, and there were two speakers that I recognized, Regis Brun and Ronnie Gilles LeBlanc, they were the ones who alerted me to the old movie that was at the genealogy center that my mother was in around 1935 or 1936.
The documentary was very well put. It spoke of when the men were told to meet in the church at a certain time along with the boys, and the ships were coming and the acadians were told they were only ships carrying provisions, and how the families were divided , sent out on different vessels , to different parts of the world, and how at some places the Acadians were not allowed to leave the ship. Many children died on the voyages, and how crowded the ships were.
And it talked about when the Acadians settled in Louisiana and they built dykes there and other Acadians later joined them .And naming it the New Acadie.
I was very impressed with the documentary. It also spoke of the Acadians who fled and hid in the woods, and how many died of starvation along the way, how some fled to Cape Breton and New Brunswick. Picture yourself back there, running with them, afraid , hungry and determined to stay alive and free.
In closing I would like to just say, tell your children about our ancestors, tell them stories, write them stories, share their songs , share their way of life, and tell them to be proud to be an Acadian even if they only have an ounce of Acadian blood.
Thanks for the visit ,do come again
Have a great day
Aline
Posted by alineskee at 6:47 AM