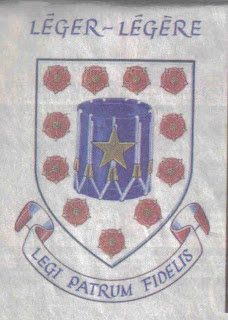 It is now official, the Leger/Legere families now have their own coat of arms that has been officially registered in Ottawa. On Valentine Day, there was to be a ceremony at the University of Moncton. I can imagine it must have been interesting, and they were to retrace the footsteps of our ancestors Jacques Leger dit La Rosette. As you know Jacques Leger the first one to come to Acadie was a drummer in the military. So as you can see the drum in the center of the coat of arms represents Jacques Leger dit La Rosette, and if you count the rosettes all around the drum you will see that there are eleven of them, representing the eleven children of Jacques Leger dit La Rosette and his wife Madeleine Trahan. The star on the drum represents Acadie.
Mister Stephen White in the article of the L'Etoile where I found the coat of arm and story said that the records where the marriage of Jacques and Madeleine would have been married do not exist anymore. We know "he continued to say" that Jacques came from France but we do not know where in France.He was a soldier and a drummer soldier.
The article continues to say that the Legers are not the only ones who have registered for a coat of arms, there are also nine others; LeBlanc, Babin,Babineau, Boudreau, Bourgeois, Mallet, Robichaud and Savoie who on Valentine Day were also going to unveil their coat of arms.
On a different subject, we have had another taste of winter, snow, rain ,freezing rain, our paper shows a lady walking along the icy sidewalk and holding on to the snow bank as she walked. It is still very icy, anyway yesterday we decided to go check out the spring ,so we could fill our water jugs, there is a big difference from drinking spring water and drinking tap water, we can taste the chlorine in the tap water but spring water is pure. Our spring comes from a mountain, and they have a pipe so that the water flows through it. Anyway arriving at the spring, I took two jugs and headed for the path which is quite steep, I had to go through a large puddle of water , as I took a step to go down the hill I made a runway and all the water in the puddle started going down the pathway. There is no way I could have gone down, and had I tried I would have slipped and slid down in the running brook of cold water. So no way did I go. We will try it another day.
I am very happy that you dropped by today, I do know that my blogs are doing some good to some of you because , first of all you take a break from your busy schedule, second I sometimes can make you smile.
Have a great day
Aline
Posted by alineskee at 7:14 AM

hello, I don't know very much on this specific blog, but I was interested when I stumbled upon this one. Recently I researched my family tree, and found my origins to Jacques Legere dit La Rosette. You wrote about one of my ancestors, and was pleased to find out my families coat of arms. My name is Gary Legere, I'm 18 yrs old and live in Irving, TX. Heh I didn't mean for this comment to be random actually, I just wanted to say hi and tell you I was pleased at what I read, so thank you. If you want to chat, that would be cool.

Hi Gary, nice to meet you, glad you liked reading my blog, my great grandmother was also a Leger, some use the E at the end some do not. In August there is going to be a big Leger/Legere reunion in Caraquet New Brunswick, I am going to try and attend. If you want to chat you can join my petiteacadienne group and we can chat there.
Aline

Hi my name is Lenny LeGary and Im trying to see if there is a family connection.

Hi my names is James Leger from Berea KY. Nice to see more of our name out there theres just a few of us here in KY, if any one wants to chat I'm on Facebook as Puddin Leger

Hey there, my name is Angie Leger. I live in Moncton, New Brunswick and am a descendant of Jacques (Dit La Rosette)Leger I.