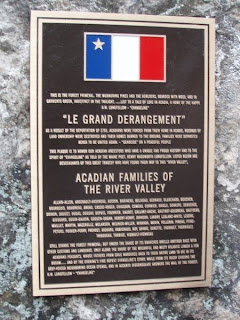 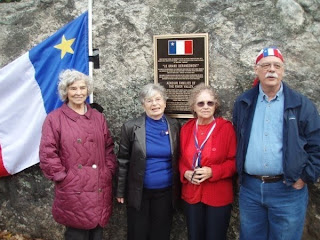 In the 19th and 20th century people from New Brunswick ,Prince Edward Island and Nova Scotia left their homes in search of better jobs.
And Rumford Maine was the target of many of these folks.
Rumford is situated in western Maine. The Adroscoggin River runs about 11 miles from west to east through the town.
In 1886 according to BB Russell, Rumford had three saw mills, a shovel handle factory ,a grist mill, a cheese and starch factory. It was also the home of the Oxford Paper Mill later changed to Mead Westvaco. Now this was a place to go to find work for the Acadians and French Canadians. In the 1910 census I did a fast search and I noticed some of the following surnames and I did not do the entire census. I saw some Blanchard, Boudreau, Trembley, Boulanger, Gallant, Perry,Poirier,Cormier,Legere,Deveau,LeBlanc,Myers,Mallet,Gagnon,Bourgeois,Boucher,
Richard,LeBel,Bergeron,
Soucy,Surette,Casey,Martin,Babineau,Landry,Desroches,Daigle, and there were plenty more surnames. The people in the photo above are left to right Dorothy Martin Bernard,Lorraine Robichaud Legere,Hazel LeBlanc Hodgkins and Robert Daigle and they have done something so very nice and special. They had been working on their project for a whole year. They raised money through fundraisers and decided to put the money to good use. They wanted the Acadians who went to their River valley to be remembered. Since many Acadians did settle there and many worked for the Oxford Paper Mill in Rumford so they decided to have a placque made in their honor.The placque is now mounted on a rock near the Rumford Public Library. The ceremony was held Oct 31 2009. The Rumford town Manager Carlos Pouiia gave a speech. His mother was an Arsenault. The president of the Mexico Historical Society Bob Daigle gave a short speech on the Acadians. Terry Richard who's mother was a Richard and her husband was Dr Ed Martin the founder of the Acadian Heritage Society in the Rumford-Mexico area said that it was important to remember the Acadian families that populated their valley in its early days and that the dedication of the placque in their honor was a great thing.Lorraine Legere read a poem she wrote called A Tribute to the Acadians in the River Valley. Refreshments were served in the library and an old video of an old Acadian Heritage meeting which featured remembering Christmas in PEI in 1890.
So to Dorothy, Lorraine,Hazel and Robert I say to you, congratulation on a project so well done. That placque will be seen over and over again and parents can tell their children about their Acadian Ancestors.
Thank you all four for allowing me to post this on my blog and to share with all my readers.

Have a great day
Thanks for the visit
Aline

Posted by alineskee at 6:22 PM