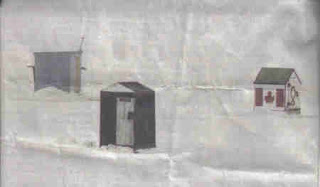 Hello, no the above are not outhouses,grin they are shanties, and they are used in the winter time by fishermen. They are little huts, hauled out onto the ice. Inside them ,the fishermen drill holes in the ice for fishing. They can have little heaters inside to keep warm. I remember my late husband going ice fishing , it was really cold, and Gerry and his friend used a truck to drive onto the ice, I don't think I would want to take a chance. They had gone smelt fishing. Some men use spears to catch them, others use lines. In the early spring the men have to remove their shanties off the ice before they sink into the water. I came across this photo while reading the newspaper at the laundromat. The photo was taken on Shediac Bay. Here is a little bit from the article; It's pretty hard to spear smelts by sitting in the open on the ice. You need a dark shack sothat you can see the fish in the water from the light that filters through the ice. In the dark shack, they show up really good, not so good if you are out in the sunlight.Dozens of smelts can be speared in a single day.
What about our ancestors of long ago? I don't imagine they had shanties, so if they went ice fishing, it sure must have been cold for them. And making a hole in the ice must have been hard to do back then. But probably they were used to the cold, and back then ,roads were not that plentiful, so many of our ancestors used the rivers to travel. In the winter with horses and sleds in the summer by boats. Take Prince Edward Island for instance, there were no bridges or ferries back then, so they had to cross the strait the best way they could, again by sled in the winter and boat in the summer. And what would our ancestors have fished? Well Cod was their most important fish, then probably they fished Herring, Makerel, Trout,Smelts,Gaspareaux. One thing for sure if they could fish, they would have plenty to choose from , plus the lobster, crab, and shellfish. And the ancestors who were not near the water, hunted for wild game to feed their families, Moose, Deer,Bear,Rabbits,Porcupine,Beaver,Partridge, Duck,Pigeons, oh yes they ate all of the wild game they could catch.
I was reading when the Acadians were led to safety through they woods, and the article said, they lived on Beavers,Rabbits, or any animal they could catch, depending on the time they travelled, Berries would have been plentiful too. But there came a time, some of our ancestors were fleeing into the woods to avoid being captured and during the cold winter months, there would not be any berries, and the snow would have probably hindered their hunting, can you imagine walking in the deep snow in the woods, trying to hunt? I only walk from our steps to the car and if there is a lot of snow, I get really tired. That is why many Acadians died in the woods, from the cold and from starvation. So very sad. If we only stop and imagine how awful it was for them, we would be so grateful for what we have today.
Well this is it for today, hope you enjoyed my blog and will come by again.
Have a great day.
Aline
Posted by alineskee at 10:25 AM