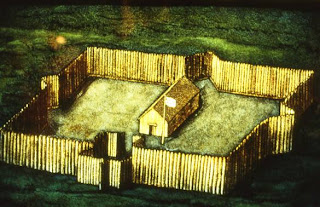 First of all the source for the photo of the Fort is the Department of National Defence.
The reason I chose it ,is to give you some kind of idea about our Acadian ancestors being held prisoners there.
As you know many of the Acadians were captured by the British and held as prisoners in their forts. Imagine what it would be like, separated from your love ones, not knowing what will become of you. All the men could think of ,was to escape from their captors. Some Acadians even escaped from ships, such as the case of when Winslow ordered some transport ships to carry some prisonners away, instead of transport ships he received supply ships. He decided to fill five ships with Acadians, he wanted to keep the families together as much as possible, anyway there were 24 men who escaped and a Francois Hebert was charged as the instigator and Winslow ordered him brought to shore and watch while they burned his house and barn. Out of the 24 men , 22 surrendered and two were killed.
Now back to the Acadians who escaped from the Forts. If you go to my acadian-roots website and click on my Cormier genealogy, I added about Pierre Cormier aka Pierrot son of Pierre and Cecile Thibodeau who escaped with his brother Jacques by disguising themselves as women.
The women were allowed to visit their sons or husbands and they would bring them in clothing and breads and sometimes tools or knives. So Pierre and Jacques just walked out of the Fort as women, once they were out, they watched as the Sentinel turned his back and they ran for the Dykes and they crossed the dykes by grasping one branch then another until they were across. Once they were across, they watched as the Sentinel turned away and ran into the woods.
You have to remember that the Acadians knew their way into the woods, they probably had shortcuts the English never knew about.
On October first 1755 Dr.John Thomas wrote in his diary: "Storms dark night eighty six French Prisoners dug under ye wall att Foart Lawrence and got clear underdiscovered by ye Centry.(Father D'Entrement article).
Well on October 1 1755, during a really bad thunderstorm Beausoleil and 86 Acadian Prisoners in Fort Lawrence escaped by digging a tunnel under the prison wall. Now the women had to be careful what they smuggled in, so spoons, knives, and small tools is probably what they brought. The men would take turns at night and dig a tunnel under the ground using whatever they had. They would pile the dirt under the beds. When the time came for their escape the men went out in order of their size, the smallest man to the biggest .Each would squeeze through the hole to make it bigger for the next man. The last one out is said to be Rene Richard (Petit Rene) son Rene Richard and Marguerite Theriot husband of Perpetue Bourgeois who would have been 29 years old. He was the biggest man of the prisoners. Joseph Broussard .some of his sons and nephews were also among the ones who escaped.
Another eighty Acadians escaped on Feb.26 1756 from Fort Beausejour. These prisoners were fed horse meat and at the request of Pierre Surette son of Pierre and Jeanne Pellerin, the men saved the rib bones which they hid from their captors. At night they would dig with these bones to make a tunnel to escape. Can you imagine all the work and time this took? Imagine with a bone digging a tunnel big enough to go through? So the day arrived for their escape, they did the same , by letting the smallest man out first and making the hole bigger for the next man. The last one out was Pierre Melanson ,he was the biggest, and he got stuck in the middle of the tunnel. Receiving help from the other prisoners he got out just in time to flee into the forests with the other prisoners. They knew which path to take as where the English didn't know their way into the woods. These men stayed nearby in the woods, ate whatever they could find but food was scarce it was in the winter and the cold and hunger made them head out towards Miramichi where the situation was no better and they surrendered in 1759.
We have to give our ancestors credit, they were survivors. I am sure there were many more such great escapes , and events that we will never know about them.
I hope you enjoyed reading todays blog and these are things to write down along with our ancestors and their history.
Changing the subject, I was telling you we were on our way to look at a tent? Well we bought it, it is a two room tent, so we will have room to put our cooler inside and maybe some chairs, at least we hope so. The tent is quite big. So we will be much more comfortable when we set up camp for two weeks for the CMA2009. If any of you readers want to meet me and my genealogy group, let me know, and I will fill you in on where and when. We think we will all meet August 15th on Acadian Day.
Also if you have any ancestors who link up to Barthelemy Bergeron and Genevieve Serreau dit St Aubin and want to attend our reunion in July in Fredericton let me know.
Thanks for the visit,
Have a great day
Aline
Posted by alineskee at 12:39 PM

I've read this story before but it was nice to hear again.
Thanks, Aline
Evelyn in Montreal

you are welcome Evelyn, it is always nice to hear these stories, and I am sure there are some who are just begining their genealogy who have not come across these little stories. Glad you liked them.
Aline

Interesting post, Aline. Welcome to GeneaBloggers too.
Good to see another Canadian in the group.

Hello Diane ,glad you liked my post and nice to meet you. I am glad to be on geneabloggers too.
Yes I am from New Brunswick.
Aline