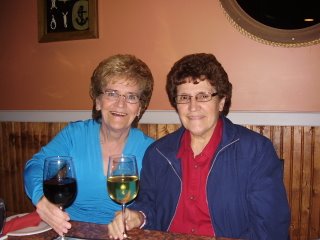 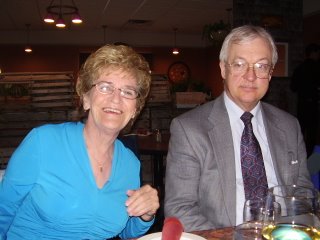 Last night we went to dinner at a lovely restarant called the CREEK, it was the first time I had gone. My friend and I arrived around 5.30 pm, the dinner was at 6 pm. We sat in the front near the bar, and waited for our party to arrive. The first ones to arrive were Francis LeBlanc and his wife Norma, so we chatted a bit, it was the first time I had met Norma, but I had met Francis at the CEA. I remember the first time I met him, he was working furiously on his laptop, and some researchers were asking him questions on the LeBlancs, so I at the time could not find what I was looking for, and I asked his help, he is a very nice person and a nice sense of humor. Norma also was very nice to chat with.
Next to arrive were Lucie LeBlanc Consentino and a friend of hers who came down with her named Marcel, now Marcel is a very nice man also, he was interesting to listen to, he also came down to do genealogy. And as for Lucie I don't have to tell any of you how nice she is, because you all know it. She was fun to be with. But that was not the only people at our dinner, because Lucie invited Stephen White and he accepted, and it was very nice having him with us.
Of course you must all know that the biggest part of our conversation was in some form of genealogy (smile). My friend asked each one of them how they got started in genealogy, and everyone had their own story it was very interesting to listen to.
As I listened to each of them tell their story, I could see the love for genealogy each one of them had. They are all totally addicted to it.
I even told them the story about the old film I saw at the CEA and about seeing a cow at a window of this old tar papered house, which turned out to me my parents house and their cow.
And how Ronnie Gilles made me a copy ,which in turn I copied and gave to all my siblings for a christmas present.
This was a very very nice night, I hope you like the photos above, of Lucie and I , and Stephen White and I.
Have a great day.
Aline.
Posted by alineskee at 4:33 AM

Wonderful pictures Aline! As I look at them I can see certain similarities in the facial features of you three.

I think it's terrific that Stephen accepted the invitation to dinner and you all got a chance in a non-formal environment to share stories and brainstorm.

As far as the addiction to genealogy goes... well ... "Are you addicted to genealogy research and find that those around you don't fully understand? Have we got the group for you!! Just log on to www.acadian-roots.com and the group will be waiting with open arms!"

I'm glad you had such an enjoyable time Aline - another memory for the journal.

Nova, Lucie asked about you last night, so you were thought about.
Yes we are addicted .....to genealogy (smile)