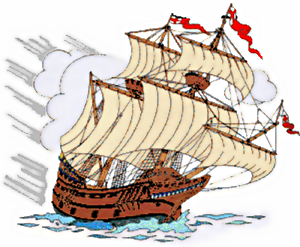 Duke William was one of the many ships that were used during the Deportation of the Acadians. In 1758 the Duke William and the Violet both left around the same time with their ships filled with Acadians for destinations elsewhere. The two ships lost touch for a while and then met up again. The captain of the Violet contacted the captain of the Duke William and discussed the bad weather and the condition of his ship. On December 12 the Violet sank into the ocean. The Duke William was also trying to save their ship. Even the Acadian passengers pitched it and worked feverously to try and pump the water from the boat, but it was no use. On December 13 the day after the Violet sank, the Duke William sank into the cold waters of the Ocean. Many Acadians were lost at sea during the Deportation, and we will never know what their last moments were like, BUT we can read what happened to the Duke William. The Captain and his crew escaped in a lifeboat, and the captain "Captain Nicholl wrote a jounal about that fateful day and the loss of the Acadians. I have been given permission to add the Jounal on my website, and I have done so. My special thanks go to Ken and Shawn Scott. As one of them said to me "The more people that reads this Jounal, the more that will know what happened that fateful day in December on the Duke William.

So now I have added it to my website at http://www.acadian-roots.com/ ,click on the url next to the lighthouse. I do hope you will read it and learn about the tragedy of all those who lost their lives.

Now I want to change the subject,and share with you what Mom shared with me today. I always love talking with Mom, because when she tells me about long ago, she makes it so interesting.

Today we talked about my grandfather, Mom told me that my grandfather was a very strict man at times and other times he was fun to be with. He was a teacher part time, and he believed strongly in his children being educated. Mom said night after night, he would have the children sit on the steps or around him, and he would read to them. And then he would make them read what he had just done. I said to Mom were they school books? Mom replied "Dad had all kinds of books, but he loved Robbie Burns and he would read poetry to us by keresene lights." Mom said because of my grandfather reading to them, at school their marks were very good.

Then Mom continued talking about him, she said she remembers when he worked in the woods, he also was a saw filer, and Mom said that she remembers him coming home ,night after night carrying two logs one on each shoulder for firewood. And she said, that she saw him being so tired that he could not take his moccasins off, he would ask Mom to do it. Mom said , she would unlace the Moccasins and pull them off. Then she said to me, Granny too worked hard, when Grandfather was away working , she had to tend the animals, and do the rest of the chores but Mom said we all helped her with the chores. See what I mean about memories, and sharing them and writing them down ? I intend on writing what she told me today in my book.Well thanks for stopping by, please be sure to go read Capt. Nicholls Journal, and remember he wrote this in the late 1700s. Have a great day.

Posted by alineskee at 2:57 PM