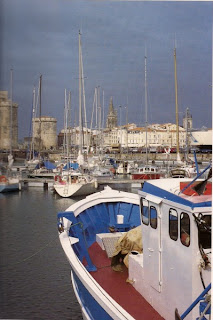 Last week while at a yard sale I asked this lady if she had any genealogy books or acadian related books. She replied "no I don't believe I have, but I have a book on Poitou France. So I glanced at the book and wow, there were lots of photos and the one on the right caught my eye. La Rochelle France,why did that catch my eye? Well my Cormier ancestors Robert Cormier, his wife Marie Peraud and their young son Thomas left La Rochelle in 1644 for a new life in a new land to be named Acadie. In the early 1600s La Rochelle was the last stronghold of Huguenots in France and there was a famous siege led by Cardinald Richelieu in 1627. It was at that time that Richelieu drew up the charter for One Hundred Associates. The cost of the siege was the loss of some 23000 casualties. In 1637 the largest influx of settlers came to Acadie many of them from the Poitou, Aunnis and Saintonge areas. Around three hundred Catholic peasants from the estate of Charles D'Aulnay at La Chaussee near Loudon set said for their new home in soon to be Acadie.La Rochelle was an important port back then as it is still one now. So many of our ancestors boarded their vessels at La Rochelle and crossed the ocean to reach their destinations. I wonder if this is where Barthelemy Bergeron dit Damboise and Jacques Leger dit La Rosette boarded to come to North America? They were both soldiers one belonging to Troupe de la Marine and the other a drummer . In the book I got at the yard sale, it says that in1568 La Rochelle became a Huguenot city . Then lots of tragedy with the siege of Richelieu that lasted 416 days. The port would become very active and important paticularly with North America (where our ancestors were heading for) Today La Rochelle remains one of first French Ports in Europe and also a cultural capital and tourist area with lots of festivals and museums. I wonder where Robert Cormier and his family had travelled from to reach La Rochelle? Will we ever know? There have been many historians and priests that have searched for the illusive Robert Cormier but who knows what will happen in the future with the new found tool called the Internet. With all the records from France coming online, one day someone may be looking for another ancestor and poof our Robert just might be there.

Thanks for the visit ,do stop by again

Have a great day

Posted by alineskee at 3:57 AM

Hello.
I stumbled upon this blog when looking for the history of Robert Cormier. I am also a descendant.He was my great x11 grandfather. I am traveling to France in September and am hoping to dig up more information about him in La Rochelle. I am wondering if you could tell me the name of the book you found so I might search for a copy...?