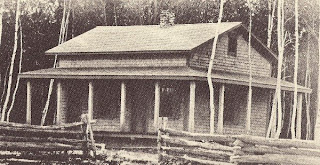 Have you ever wondered about some of the Acadian habits? Have you ever wondered about what they did to pass the time away?
Well for one thing they had Taverns where the men would congregate. When the Acadians were in Beaubassin, they had a tavern owned by a William Cyr. And on some articles I read, it also said that when the English and French were not fighting, they were drinking at the same taverns. Think about it? Two men from different sides at a tavern drinking and talking together and becoming friends. It must have happened, since some english soldiers did marry Acadian girls. Did they make their own beer back then? I read somewhere that the Acadians used to make beer from spruce.
Now I have recently bought a book called Les Defricheurs d'eau and inside the book, it talks about the buildings at the Village Acadian (Acadian Village ) in Tracadie.
The photo above was the tavern belonging to a Louis Poirier of Caraquet New Brunswick. He was born in 1847 married in 1871 to Ombeline Hache; they did not have any children. The official opening of the tavern would have been around 1880. At one time part of this building was used as a store. The tavern back then opened at 8 am until 6 pm and sometimes even later depending on how long the discussions would take. In Mister Poirier's tavern there was no beer sold. Beer was only introduced in the region with the arrival of the Eudistes priests who according to tradition made it themselves.
Among the most popular liquors we found Jamaican Rum,De Keyper Gin from Holland and Brandy from Iles St Pierre et Miquelon.
The bartender seemed like a jovial man, respected and honest. You could buy the liquor to drink it there while playing cards or checkers or else take it home. During the long winter months the villagers would gather at Louis Poirier's tavern or across the street at his home.
So as you can see, liquor has been around for ages and ages, even during the prohibition years liquor was sold many time illegally by bootleggers . There sure must have been lots of discussions and bragging during these visits to the Tavern or Bootleggers huh?
I would like to end this blog with a little bit of advice, back then you have to remember they had no cars only horses and wagons , so if they got feeling good probably the horses took them home . grin. BUT today it is not the same, there is too much traffic to get in your car when you have had too much to drink, do not take the chance, instead take a taxi. Better safe than sorry.
Thanks for the visit, do stop by again.
Have a great day
Aline
Posted by alineskee at 4:48 AM