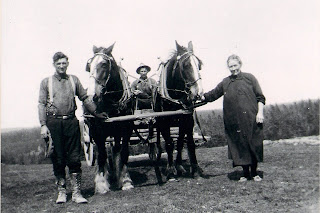 Hello everyone, first of all why did I mention Soldier's cove? Well my mother told me she remembers being there when she was little because her father had gotten a job there probably in a camp. Anyway Mom came across this photo among her photos ,this was a family from Soldier's Cove , she did not know anything about them so I posted it here hoping that some of you readers might just recognize the people. This would have been taken in the early 1900s.

Now let's change the subject, I was reading a book called The Acadians of Nova Scotia and inside I found the following about Chezzetcook Nova Scotia:"Several hundred Acadians were brought to Halifax as prisoners between 1758 and 1762. Some were deported and some were permitted to settle in various parts of the province. A certain number of these prisoners made their way across Halifax Harbor to Chezzetcook, maybe because of the Marshlands, but most likely because of the MicMac settlement known to French Missionaries for many years. Family names still common today in West Chezzetcook and Grand Desert which can be traced to those former prisoners are Boudreau,Bellefontaine,LaPierre and Wolfe. Despite of the appearance of the surname Wolfe ,it is a french name.Augustin wolfe was born in Alsace France in 1721 and appears in 1751 in Halifax as a colonist.Besides the prisoners there was another group of Acadians all whom had been living in Cape Breton and were giving permission to settle in Chezzetcook, they included names like Petipas,Bonin,Roma,Manet and Mayet. And Chezzetcook also became the home of Breaus and Bonnevies from Miquelon and also for Simon Julien a deserter from the Napleonic wars. In the first part of 1770 there were around 12 Acadian families in chezzetcook and when the Bishop of Quebec made his visit to Nova Scotia in 1815 there were 47 families.Thought you would enjoy reading this little tidbit on Chezzetcook. I believe one of my Bellefontaine ancestors was there for a while.Thanks for the visit, I need a break, a coffee break , a Tim Horton's break. grin.Do stop by againHave a great day