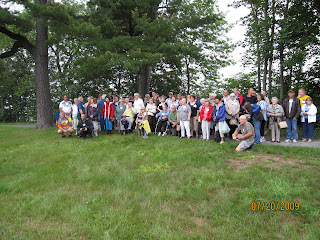 Well our Bergeron-Damboise Reunion has come and gone. After all our plans and preparations we had the reunion. We had people from Louisiana, Maine,New Hampshire, Maryland,Virginia,New Hampshire, North Carolina,Tennesee,Las Vegas, Quebec, Ontario, New Brunswick and Nova Scotia. What a great reunion.
We had rain on Saturday which sort of was a let down but it cleared and from the Park and Motel we went to the old Acadian Cemetery. I will post a photo of our group at the cemetery. Now the cemetery has no tombstones or markers at all, there is one monument depicting an Indian Princess or woman. Because the native americans say that that cemetery is an Indian Cemetery, yet there were acadians found in a mass grave in that same cemetery and the bones were tested with DNA , one of the skeletons was Anastasie Godin .
It is possible that some Native Americans shared the same cemetery, because back then the Acadians and Native Americans lived side by side.
It would be so nice if the government would declare the cemetery and the former grounds of the Sainte Anne de Pays Bas Church a historical site. It would be a place for Acadians to return to visit.
We marched from the Lieutenant Governor's house to the cemetery, the ones who could not walk it, drove. Arriving there, Jan Bergeron said a prayer and then some walked around the cemetery. Then we formed a group and took the photo above. We took more photos there but I will share this one. I want to create a page that is more detailed on my acadian-roots website. But I am waiting to receive more photos so that I can choose the ones that will go with the story.
After our day at the cemetery, we finished at the Legion Hall listening to music.
The manager of the Legion announced our group, we were around 38 who went.
The next day we went to a Mass said especially for our group by Father Savoie and then we went to our Hall for a lunch and lots more.(which I will tell you on my website later). We ended our reunion with a tree planting ceremony on the grounds of the Lieutenant Governor of New Brunswick ,Honorable Chiasson who also allowed us to visit the house and enjoy a nice reception given by him.
This was thanks to Mister Bernard Theriot who made it possible for us.
Everyone is talking about the reunion and saying "when and where will our next reunion be?" Some were saying "What about Louisiana?" "Or Quebec?".
Time will tell. So now you know a little bit more about the reunion. Stay tuned for more stories and photos.
Thanks for the visit and have a great day.
Aline
Posted by alineskee at 7:09 PM