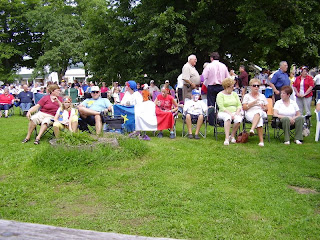 Acadian Day Celebrations went very well in Memramcook yesterday August 15 2008. We thought we would be having rain, so we prepared for it, umbrellas, rain bonnets, grin but lo and behold the sun came out shining for us all day long, it must have been our ancestors up above shining down . The crowd was a little slow at first but soon the field was full. I took a lot of photos, and will soon let you know when and where you can see them. The three bands were very good. And everyone was having a great time. I enjoyed watching the little children, running and playing and all dressed in Acadian colors, waving flags, it was something to see. There was this little girl, she was not far from us, and the band was playing and that little girl kept swaying to the music in a world all her own. And there was this other little girl she was maybe two or three years old, and she was on her mom's lap and she was blowing this horn. She was right next to me, and each time she would blow that horn I pretended like I was scared and she would burst out laughing, she did this three or four times in a row. We had some acadian dishes, I had some rappee pie and my friend had fish cakes, they were ok, but my rappee pie is much better. smile. The Tintamarre was a big success. I stood at the church in Memramcook and took photos from there as they were walking towards me, I don't want to give out too much information on the tintamarre parade just yet, I want to be able to show you the photos explaining as I go. So I am going to create another page on my acadian-roots.com site and will let you know when it is done.
The masters of ceremonies did an excellent job, and one of them gave me a list of the dignataries who spoke, so I will be able to tell everyone about them.
Oh and I went into the Lefebvre building and guess what I saw?? Books! Genealogy Books !. they had some on sale so I bought two of them, Le grand Peticodiac a Mi Siecle , Histoire des Trois-Rivieres volume four part one and part two by Paul Surette.
Pretty soon I will need my own library room grin, thanks to everyone who sent me books, such as Maria,Paul,William Gerrior .
On another note I am not sure where P'tit Francois is, I have written to him and also to the Etoile Paper asking where his weekly article is. Last week and this week there were no P'tit Francois des bois in the paper, that would be a shame if it was discontinued, I am certain there are many who would be dissappointed, I will let you know if I receive any news.
So thank you for the lovely visit, do drop by again.
Have a great day
Aline
Posted by alineskee at 1:37 PM