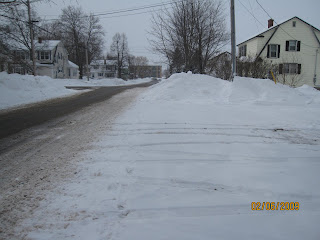 I want green green grass, but we got snow,seventeen centimeters of the white stuff. We had flurries all day long. Now I would like it to just dissappear.
Now on another note, I would like to say, never ever let a man do the cooking. This morning George said to me Aline I will cook breakfast. Oh boy! Sure I said , that would be nice, while you are cooking the bacon and eggs I will take my shower.
So I was in the shower and after a while I kept hearing beep, beep,beep. What is making that sound I said to myself. So I opened the bathroom door. I could not see a thing. There was smoke everywhere. I had to feel my way down the hall. Just as if I was swimming. grin. By then George had taken the frying pan off the stove, he told me he liked his bacon crisp, crisp? It was charcoal black. I don't even think there was any bacon left. I said what happened? He replied I was on my COMPUTER and I forgot all about the bacon. The beep beep was the smoke alarm. Open the windows, open the windows. Phew what a smell, we even had to leave the apartment the smoke was so bad, we went down the road to a restaurant and had breakfast. The meal was the special of the day , bacon and eggs ,fries and toast for 3.99. Thats good , very cheap we said. We ordered each a cup of tea, when we got the bill, it was 4 dollars and twenty cents extra for the tea. We were gone for quite a while, when we returned, it still smelled smoke, so I used some plug in scented oils, it helped. But to be honest, it is a good thing that the alarm went off, because the pan was onfire. Worse things could have happened. So be very careful, grease is so very dangerous. We had a cover to stop the grease from flying it is a good thing.
Today I did not do too much, I found some information for two of my members. One of the names I was looking for was Kearney, well I found three different spelling , Kearney,Carney and Quarny. So sometimes when we cannot find someone, try another spelling that would sound the same.
I am happy that I did find this information, even if it is only one marriage, that is another part of the brick wall tumbling down.
Well that is it for now, I have banana bread in the oven, and I don't think I want another smoke filled room.
Thank you for the visit, do stop by again.
Have a great day
Aline
Posted by alineskee at 7:19 PM