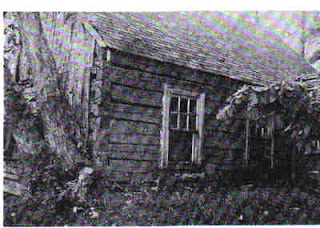 ACADIAN HOMES . Have you ever wondered about the way our ancestors lived? The photo on the right is about 200 years old, I found it in the genealogy center along with an article on old Acadian houses by Father Anselme Chiasson. The article includes extracts from document of when they talked about the Acadian houses. So here are some of them.In Menneval Memoirs in 1688 he says, Port Royal is an area that has around 20 awful looking houses of mud and wood. There is only around six houses and the rest far from one another about 6 or 7 lieus all along the Port Royal River.In 1731 Robert Hale wrote the following: They have but one room in yr houses besides a Cockloft,Cellar, and sometimes a closet. Their bedrooms are made something after ye manner of a Sailor's Cabin, but boarded all round about the bigness of ye bed, except one little hole on the foreside, just big eno' to crawl into, before which is a curtain drawn and as a step to get into it, there stands a Chest. They have not above two or three chairs in a house and those wooden one, bottom and all. I saw but 2 Muggs among all ye French and ye lip of one of ym was broken down above 2 inches.When they treat you with strong drink the bring it in a large bason and give you a Porringer to dip it with. Desbarres's papers in 1795 describe the homes this way: The premises of every one seem to be a house from 18 to 25 ft long and as many in breadth without porch or partition but the outer door opening immediately into the sole room. There are generally two doors, the one being that which is used . The chimney of which the lower part is stone and clay wrought upon cross bars of wood beneath a wooden frame is in the remotest part from the door.The Beds are on both sides of the house from chimney to the doors. In the end of the house opposite to the chimney, the pots and water vessels lie on the floor, and the Milk and Milk vessels are disposed of on shelves, together with their bowls, muggs,etc. As they all sleep ,eat, cook,smoke,wash etc in this house or room, I need not say it must look black and dirty enough particularly as the houses are now old. Behind the Chimney on the out side is an oven of clay, the opening to which for bread and fire is on the In side back of th chimney. The oven rests on a square wall of Loggs or stone around an appartment three or four feet in the square, where a few pigs enter on the out side, and lie warm from the heat of the chimney and oven. In their barns they are more sumptuous. They are from fourty to fifty feet in lenght, from twenty to thirty in breadth and from ten to fifteen hight, the lower story destined for the cattle and the upper for the corn,hay,and threshing floor; At a distance they sett off the whole place. I had almost forgot to mention that their houses have a cellar under ground for the roots to which they descend from a trap door in the floor.

An old house in Memramcook in 1846. In June 1846 ninety one years after the Grand Derangement, in an old log house situated near the Cran a Ben on the east side of the Memramcook River around 3 miles from the church lived happily an acadian family Amand Landry and his wife Pelagie Caissie, four children, the youngest named Pierre age one month, also living with them was Allain Landry widow and Natalie Landry.

This log home was poorly built, not much lighting and not comfortable in the winter. In the center of the house was a huge Chimney made with stones poorly assembled. The house was divided into two parts by a wall of boards. During the winter they only used the southern part of the house that only had two windows one south and one west. Near the chimney was the door to the cellar where they would go by with a small ladder. This cellar was but a hole where the light did not shine in because there were windows, and the house would get cold because of the cold cellar.One side of the house was one big room that held the kitchen, dining room,bedroom. Around the room, there were three bedrooms which could be 7x10 feet each with no windows. The guest room was in the attic ,the floors were wooden and in this room there was a wooden bed. A cradle of rough wood, three or four chairs, three or four Chests and a table was all the room contained. A large square stove adorned the humble and frugal abode. They had five arpents of land, about 15 arpents of meadow, a barn ,four or five cows, hens, geese,turkeys, ducks and pigs. (written by an elderly man in Memramcook named Landry.

Now you have an idea what the houses were, and you must also notice that our Acadian ancestors were not rich, they survived the best way they knew how. They were a strong people , the more you read about them the more you will realize this, they had hard times, shed a lot of tears I am sure, and did not give up.

I hope you enjoyed this blog, I got this information in the SHA=Societe Historique Acadienne.

Have a great day, thank you for the visit. Just a note to say, Mom is doing pretty good, she still cannot walk but my family is all praying that she will do so soon.

Posted by alineskee at 3:50 PM

Aline, those houses remind me of what I seen as a little girl, growing up. No one was very rich but we struggled and did not complain.

I am glad to hear your mother is doing much better. We will keep her in prayers for a quick recovery.

We are expecting our daughter-in-law to arrive here tomorrow morning. Her grandfather passed away over the weekend. He was to be going into a nursing home and I am sure the Good Lord, seen him suffering and took him home. He had alzheimer's disease for awhile now and was being looked after at home. It was becoming more difficult the past few months so now the family can be their for their mother. Such a sweet couple.
I know Pearl, is going to miss him so much but she is not well now.
E

Aline, thank you for this article - and I appreciate all the work you're doing to spread around some historical information.
I'm not sure all your readers realize that you are translating a lot of his information.
Evelyn in Montreal

Thank you Evelyn, yes I am translating the info from French to English, would you believe I have a french and english dictionary and many many times I have to look up some words to translate? grin. I enjoy what I do and I am pleased that someone likes reading it.
Aline