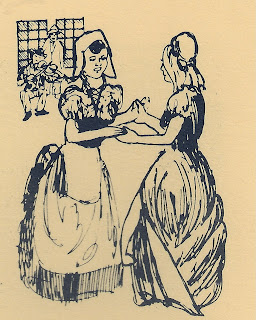 I would like to share some parts of a book called A Land Discord Always by Charles D Mahaffie JR. I have only begun reading it and so far I find it to be quite interesting.
Here is a part I like:
To the people ,the long lasting Mathieu de Goutin was probably more important that the governors.Resolution of disputes is a governmental function that few societies can do without, and for twenty two years Goutin was their chief clerk and judge. His decisions could be overruled in Quebec but Quebec was far away, and de Goutin's judgement was usually final. Too,he married Jeanne Thibodeau daughter of an unusually prolific Acadian family, and in one way or another, he was probably related to a significant number of the litigants who appeared before him. Who ,after all would quarrel with Uncle Mathieu? There were less formal systems of justice as well. During Villebon's time, the Minas and Chignecto settlers elected panels to settle aruguments over farm boundaries, stray cows etc. And parish priests served as arbiters,often with the last word on any subject. Indeed they could if they wanted to brandish the ultimate sanction. It was a brave man would chance having the sanctions withheld.
Acadians lived simply but for that time they lived well. Pork was a favorite usually cooked with turnips and cabbage to make soups or stews. There was plenty of grain for making bread, fruit, vegetables, and milk were abundant. Maple sugar was a luxury, and another was beer brewed from firs and spruce branches boiled with molasses. They sewed,knitted,weaved,tanned.
According to Diereville he would bring a nice Bordeaux wine during his stays and found the food not unpleasant. Diereville said the following .
"There's nothing which they cannot do;
And by a hundred different needs inspired,
They make the things they lack; their wool
Is fashioned into Clothing,Caps and Socks,
They are no way distinguished by new styles,
And still wear hooded Capes; their Shoes
Of Elk and Seal skin are flat-soled
And made for comfort. From their flax
Linen is also woven, and thus by
Their industry, their nakedness is veiled."
There were things the Acadians wanted and could not produce themselves, such as guns, fancy textiles,modern tools or even something to make their homebrew more potent . They were suppose to get this stuff from France, but instead they got it from New England.
The book goes on , and is very interesting. So if you are interesed in reading the book , check online to see if there are some available , or check your library to see if they have them there.
Now changing the subject, I am getting ready for the coming holiday season, I got a little tree, since I am having company over this Christmas and I am very excited. I need to take out my decorations to see what I have and what I will need. Then comes the shopping.
Our genealogy group is doing very well, we help others if and when we can, everyone pitches in who can help. I am very proud of all my members, and our Chat n brag room is doing fine, it is a private group by invite only and it is something like Facebook but private. I am still on Facebook, and started my Williams dit Bristol group, our members have now reached 32, that is not bad for just a few days .Now there are Lirettes who branch into the Williams, there are Cormier, there Dambroise, there are Gautreaus,Myers, and many others. The hard thing is trying to find out which one descends from Mathurin. If you read this blog and you descend from Mathurin Williams dit Bristol anywhere in your line, I hope you will come to facebook and look for Williams dit Bristol group and join us.
So thanks for the lovely visit, I do hope you will stop by again, you never know what my next blog will be about.
Have a great day
Aline
Posted by alineskee at 12:47 PM